Biocentrism- Go Beyond Your Limits 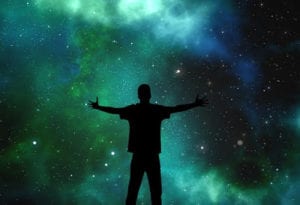 We are often told that our consciousness constructs our own reality, and that its up to us to make manifest our highest calling. But how can we deconstruct the walls or barriers that prevent us from achieving our true destiny?

The answer comes from Robert Lanza’s prevailing theory on how the universe is created. That theory is called biocentrism, and it demonstrates how consciousness is what forms our universe, not the other way around. Up until now, the way we understand the laws of the universe, and the way we participate in our reality, has been limited.

Quantum physics has demonstrated how biocentrism operates. Everything is made up of atomic matter and energy, including ourselves and the objects around us. Because everything in the universe possesses this potential energy, we can transmute, transform, or change it… if we are so willing.  The universe, in this sense, is not an accident but comes into being through our consciousness. We, in essence, create our own reality.

How does this happen? As human beings, we’ve been led to believe that our path is limited. Our minds have been set, by ourselves and others, to believe that we are only capable of achieving the status quo. Because we believe this, our life plays out according to arbitrary rules. Our true destiny may have been Superman or Wonder Woman, but we’ve settled for an alter ego that doesn’t give justice to our dreams.

That doesn’t mean that God doesn’t have a set plan for us. We do have an ultimate path and a destiny given to us by the grace of God. However, it is up to us to set ourselves at a positive vibration that attracts all of the things God intended for us in His limitless universe.

In one of my videos, I talk about using a dry-erase board to erase our doubts and fears.Biocentric theory supports this ability to erase and re-draw our boundless dreams and aspirations. We can create anything in our field to appear, much like Neo in the Matrix. Neo was able to bend a spoon, all because the spoon- which is made up of energy and matter that can be manipulated- is an object of our own creation.

Living Abundantly… and Beyond

Jim Carrey is a great example of someone who understands biocentric phenomena. In this video, he urgently tells us to believe in the possibility of something bigger than ourselves. Jim Carrey explains to us that his special purpose was simply to make people laugh- and because he did whatever it took to fulfill that special calling, he was able to forge his own destiny… and more. By staying focused on the single most important thing in his life, the universe naturally expanded his vision to include all of the things he’s accomplished today.

How does this work for businesspeople? Although I will always encourage you to hit certain quantitative goals, I also want you to think beyond the numbers- which can serve as just another barrier or boundary. If we go beyond that set number, we can think about our success in terms of everything we do, all the people we influence, and everything we have. We can live so abundantly, that numbers can’t even begin to describe our existence.

If you’re interested in learning more about overcoming the limitations your mind has set for itself, contact me at amy@amy-elizabeth.flywheelsites.com to schedule a session!

Everything you need to achieve your dreams, and more, is within you. Reach out today!